It's a small world after all... 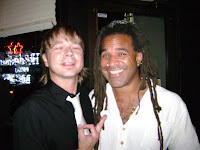 Earlier this year, in the cold midwinter of Memphis, Jae and I found a new band that we liked called The Noveaux Honkies; part blues, part Americana, part swing, with lots of sass.

To The Not So Wayback Machine!


As it turns out, the band from South Florida was playing a gig tonight not more than a couple of miles from our house, so we went to check them out along with opening act The Smokin' Torpedoes, who were also up in Memphis for that International Blues Challenge.

Jae and I got to McWell's early to eat and watched the first band set up. As members of the second band arrived, I noticed a familiar looking guy carrying an instrument. Turns out it was Mike Burney, Mohave's first bassist!

Mike caught a glimpse of me as I got closer to where he was sitting with the rest of the band and we embraced, retreated back to the bar and proceeded to catch up with one another. Man - how many years ago has it been? At least six years since he moved to California and then back again. We had a good time sharing some Cali horror stories and thinking back on those early days with McGyver behind the drum set.

Email ThisBlogThis!Share to TwitterShare to FacebookShare to Pinterest
Labels: Mohave