GOBA, Roscoe and Me


Members of GOBA, The Great Ohio Bike Adventure, were present in Roscoe Village when I arrived ahead of schedule on Wednesday evening. A hearty bunch of folks with a penchant for biking long distances for kicks, I fell in with a small group of riders at a new place in the village called Uncorked .

Those bikers are party animals, I tell you. Good thing it was a short walk, and not a drive, to get "home", which was the Super 8. 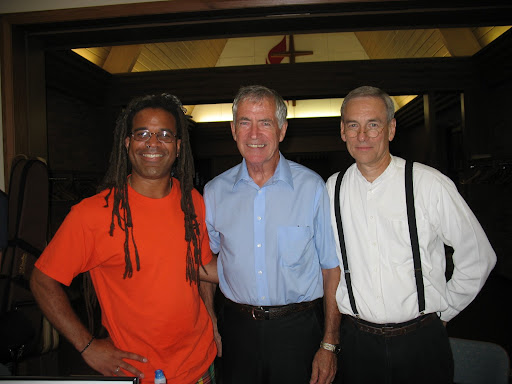 Both Rick Thum and I stayed at a wonderful bed and breakfast on the hill and were basically right inside the village at all times. It was great getting to know Rick (pictured here with me and Ray Sarchet), sitting up and discussing music and community after each day's festivities. We'd be making the trek down to Kentucky Music Week after all was said and done and had previously had some time to hang out in Morris for the Gebhard Woods Dulcimer Festival. You do tend to run with some of the same members of the pack on the dulcimer festival circuit, some more than others.

Attendance didn't seem to be as large as last year's 33rd annual Dulcimer Days, but the folks who attended seemed to be having a great time. The concerts were packed and the audience was very appreciative. I try to read the crowd's reactions to music on before me, to make an attempt and gauge what kind of tunes they like to hear. Then I mix that with something entirely different, just to keep a balance. For whatever reason, there in Roscoe Village Methodist Church, I charged fearlessly into a set that included a lot of progressive tunes, including some rip-roaring roadhouse blues numbers. It seems to have paid off, as I just about sold out of CDs after the concert.


We ended the entire thing by dining at El Yucatan (Mexican, again!) and by early Sunday morning, I was on the road, bound for Bardstown. The idea being: get there early enough, Rick, and we can take a dip in the pool at the Quality Inn and have a breather before the crazy week gets started. Rick thought it was a brilliant idea.
Posted by Bing Futch at 12:40 PM

GOBA was the most fun-loving and enjoyable group to visit Roscoe Village, Ohio in recent memory. We were delighted to host you and enjoyed getting to know a great many of the riders. We look forward to your next trip through town and welcome you back anytime.

Heh, nearly forgot to mention Dulcimer Days. This festival brings a delightful mix of music, performers and enthusiasts who add a great deal of character to the mix in Roscoe Village. Thank you for putting up with the heat all weekend. See you guys next year!