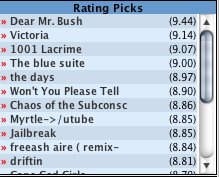 As I mentioned before, I'm seeing a vocal coach, and after today's warm-ups, I decided to revisit "Dear Mr. Bush" without spending too much time on it.

Yah, I wasn't going to do a demo version, but hell with it - it's two weeks before mid-term elections, why the fuck wouldn't I? I'm still a leather-jacket wearing, nipple-and-nose-pierced, fire-breathing liberal, so I'll be DAMNED if I'm going to puss out now.

Anyway - the response has been awesome. Over at MacJams, the song has rocketed to the top of the charts. I don't expect it to stay there or anything, but it's the first time that this has happened, so I'm going to suck it up while it's still there for the sucking. 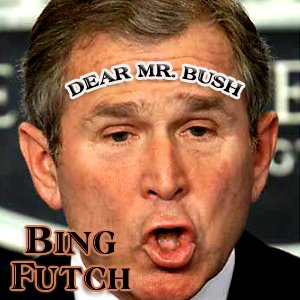 On MySpace - I've added it to my main page and, likewise, it has gotten a great response, as well as some flak - which is actually quite good to include in the repertoire. Our lives are BAD if we only hear the ideas and points of view that please US. Am I right? For those of you who disagree, er.....ookay.
Posted by Bing Futch at 11:27 PM