A Tale Of Two Ponies 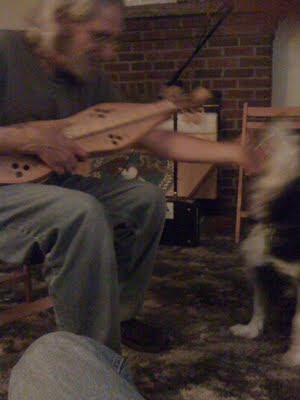 In June, I stayed with Michael Vickey on the elevated shores of Lake Erie in Northeast, Pennsylvania (which is located, ironically enough, in the northwest corner of the state) and some great jams resulted. Vickey and Mark Zimmer of the Good For Nuthin' String Band lent dulcimer and guitar to an evening of music that was captured on recording, a portion of which is represented here. The regional differences of "Spotted Pony" meet face to face in this snippet from the session.

I start off with the version of "Spotted Pony" that I'm familiar with and Mark Zimmer begins to play backup guitar. Michael Vickey soon joins in with his rendition and the two versions combine to form a lively jam. This is a sneak preview of "The RV Project: Official Album" available only to tour contributors.
Posted by Bing Futch at 9:35 AM