THE RV PROJECT: Many Miles 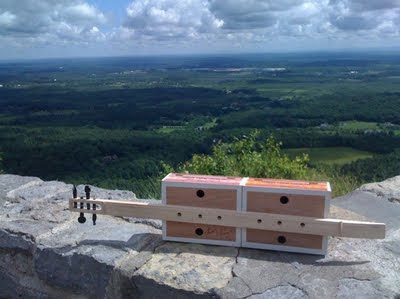 Wi-Fi has been hard to come by on the road, so I've checked in via social media for the past week or so. So much to say and show, with the big boundary being a little tiny touch screen on the iPhone. Since my last post, much has happened which has brought me to Westminster, Maryland for Common Ground On The Hill.

Old Songs Festival was fantastic! Though the weather was a little moist, it didn't deter the concert audiences from enjoying the music. It made camping onsite at the Altamont Fairgrounds a little like Woodstock, but everyone still seemed to have a great time. Aside from my sets on the main stage and in the Dutch Barn, I taught Three Irish Ballads, engaged singers with a Disney Songs workshop and also participated in a flute summit. My final workshop was all about right and left hand rhythms and turned out to be the most highly attended class. The Dutch band Kapriol' had come out and seen my set at the Old Songs community center on June 18th and we hit it off then, so it was a joy to have percussionist Ad Bos join me on-stage Friday night at the festival with the band inviting me to join them on-stage during their "Going Dutch" set in the Dutch Barn. The music was spectacular, the food was great and the mood was buoyant - a real feel-good festival atmosphere and I made lots of new friends!

After the festival, I ventured up onto the Helderberg Encarpment and relaxed, ate and played cigar box dulcimer before going to hang out at Bill and Andy Spence's house for a day, joining the Old Songs Festival staff for an Italian dinner and then departing on the next day for a whirlwind trip through Connecticut and then Mifflintown and Lancaster, Pennsylvania where all three days of workshops and concerts went splendidly.

July 1st brought me to Gettysburg, Pennsylvania, where I toured the battlefields with Sam Fuson and then performed an epic eight hour set at the Garryowen Irish Pub. The owners had told me to perform for as long as I liked and, with a full house upstairs, I kept going until I literally just couldn't go anymore. From 6 pm to 2:30 a.m., I played, stopping only for bathroom breaks and once to grab an extension cord for my wireless amplifier, which ran out of battery juice due to the sheer length of the set. Deb and Sam Fuson were wonderful hosts and the folks at the Garryowen were a sweet and hospitable bunch, even allowing me a spot in the back of the pub to camp for the night. The next day brought a workshop and house concert at Sam and Deb's - another great opportunity to share the mountain dulcimer with folks who may have not been familiar with it. This was a rare show where I presented the music fully acoustic with no amplification. It sure is nice that way!

Finally, I hit the road for Westminster, Maryland and that's where I'm at now; sitting in Rita with the air conditioner doing its best to keep things cool while the slowly dying compressor wheezes and sighs and gallumphs on and off. I'll be here for a full week with performances at the Common Ground Festival on Saturday. The festival continues Sunday, though I have no performances scheduled, it will be nice to hang out for a while before heading off for a state park somewhere in Pennsylvania. I have no idea where yet - but I'll have a few days to chill out and decompress before Portage Dulcimer Day; my final stop on this leg of the tour.

Though this has been a long journey, in hindsight, it seems to have flown by incredibly quickly! When you're living each moment, they exist in perfect space, filling your life with the magical little (and large) experiences that are woven together into memories. When you look back, the individual pieces of the quilt seem smaller than when you were stitching them together; a curious quirk of the life already lived. All the more reason to sink deeply into life as it happens, enjoying each and every event, no matter how minor or major.

The RV lifestyle comes with a slightly slower pace for just about everything, and this mindset has taken me to some pretty amazing parts of the country where I've visited with lots of extraordinary and interesting people. For this day, where we celebrate the independence of the United States, it's extremely rewarding to have spent time in some of the smallest hamlets and to have cruised through some of the largest cities (a middle-of-the-night cruise through the streets of Manhattan was an eye-opener) with the end result being a better understanding of this country and its people. I'm grateful for the opportunity, humbled and overjoyed by the experience and blessed by each person I've met on the road. And to think that this tour has really only just begun!

Happy 4th of July! Have a great time today and tonight, whatever you do!
Posted by Bing Futch at 11:58 AM