Catching Up With Myself (and the rest of the world) 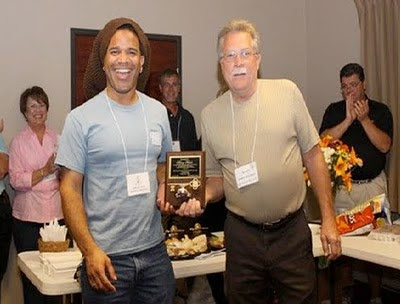 Dulcimers On The Green in Central City, Kentucky was the very next stop after a rowdy night of "The Pub Thang" in Orlando. I whisked up Interstate 75 and stopped overnight in Signal Mountain, Tennessee at the home of Dan Landrum, editor of Dulcimer Players News. We then set out in the afternoon of the next day and got into Central City with enough time to have some Mexican food at El Bracero and get checked into our rooms.

This first-year festival was quite a joy - great music and jams, lots to see and do. But what made this different was the entire teaching staff was given a key to the city during an opening night welcome party. Here, Mayor Jerry Mitchell is pictured presenting me with the first key. It's never happened before and who knows if it will happen again? All I know is, it was pretty darn cool. 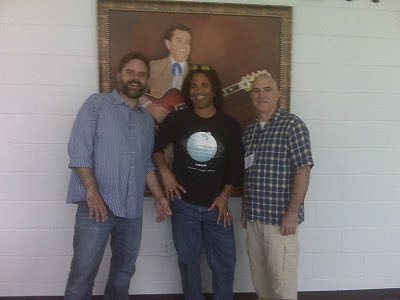 (pictured above l-r, Stephen Seifert, me and Dan Landrum) After Saturday workshops, we had a break for dinner and then the concert at the Merle Travis Music Center.

All in all it was a lovely time - Dan and I headed back to Tennessee right after the concert and then I switched horses in Signal Mountain and continued on home to Orlando where I was greeted by my lovely wife, Jae. We then headed out to meet our dear friends from McWell's over at Epcot and proceeded to zip around, having fun as you do.

Finally, a week later, we met those very same friends on board the Royal Caribbean Monarch of the Seas to help celebrate Andy Weller's birthday (it had been a surprise cruise in the making for a number of months - hard to keep this secret!) We set sail for Nassau in the Bahamas and disappeared off the radar for the weekend. It was my first cruise and I'm still sort of in denial that we're back in Orlando, getting back to the grind of things. 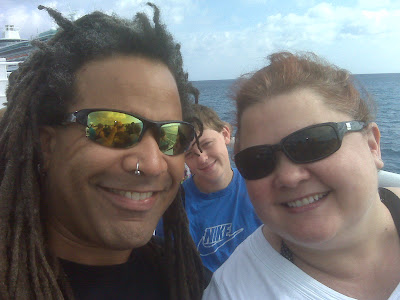 Knowing that I was going to be caught up in the cruise afterglow this week, I took the liberty of already shooting the second installment of "Dulcimerica" dealing with blues on the mountain dulcimer - it will be posted on YouTube tomorrow morning as well as at Dulcimerica.com. Thanks for all of the kind words - glad you enjoyed part one!

It's a busy week here - lots to do. Hope you have a great one - watch this space for more soon!
Posted by Bing Futch at 12:04 PM