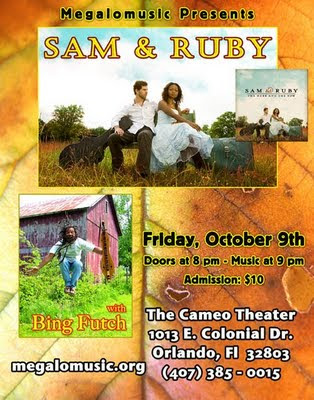 If you're in the central Florida region, this is going to be a fun show. Sam & Ruby are currently touring in support of their debut release "The Here and The Now". The duo combines sweet harmonies, acoustic folk and R&B into a mesmerizing mix. Ruby co-wrote the tune "Heaven's My Home", which was nominated for a Grammy and featured in the motion picture "The Secret Life Of Bees" starring Queen Latifah.

Friday, October 9th - doors open at 8 pm with the show beginning at 9 pm. Admission is $10. The Cameo Theater is one of Orlando's legendary art-deco venues and has recently re-opened to showcase music and art of all kinds. I'm honored to be the opening act for Sam & Ruby on the Orlando stop of their current tour!