[UPDATE: Tonight's interview has been delayed due to tech problems. I'll post an entry with the rescheduled date and time as soon as we have it. Thanks!] 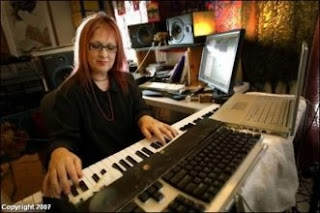 Wednesday (8/5) night at 7:30 p.m. PT/10:30 p.m. ET - I'll be a guest on Jan Pulsford's "Behind The Monitor" in Second Life. The show will be broadcast live. The radio stream is http://www.radiojana.com
and in second life it is downstairs at the music ALL music Peace Park:

A little about Jan:

I am what people consider a "veteran musician" whose life has been jam packed with musical adventures from touring with erstwhile major label pop artists like Cyndi Lauper and the Thompson Twins to working with indie artists like Dulcimer legend David Schnaufer and jazz great Chico Freeman. My songs and music has been performed by artists as diverse as Ani da Franco, Steps, Chico Freeman, Eurovision, the Leaders, Dr. Elmo, Zoe Girl, Jeff Oster, and Darlene Love, whose rendition of "Night of Peace" is fast becoming a classic. Most of the nineties were spent as Cyndi Lauper's keyboard player, co-writer, producer and musical director. We toured the world together and our creative partnership spawned some of her most artistic and critically acclaimed work. Over twenty songs were released on the albums "12 Deadly Cyns" ,"Sisters of Avalon", "Merry Xmas" and "Shine"

Hope to see you there!
Posted by Bing Futch at 7:58 AM