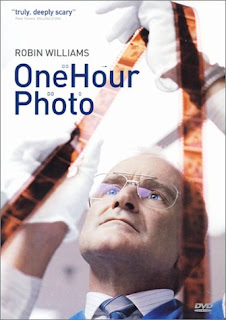 One of my favorite film soundtracks of all time is "One Hour Photo" by Reinhold Heil and Johnny Klimek. The movie, starring Robin Williams as an obsessed film processing employee, is a creepy masterstroke of modern-day dysfunction and is largely aided by the spooky minimalist score.

Let's have a listen:


It's not something you can play on a diatonic mountain dulcimer because it changes key frequently and involves a large amount of chromatic modulations involving classical-style chord inversions. However, I've just begun pouring more effort into learning chromatic dulcimer and while studying chord shapes last night, stumbled upon the basic structure of "Sy's Theme" from the movie. Now, I don't have it all figured out just yet, but just the very basic steps of trying to figure out the key and scale has opened my eyes in a number of ways. I'll share some of these discoveries and the process it took to find them.

First, I found the opening chord of the piece, which is Fm. Typically, but not always, this is your clue to tracking down the key. Since it's a minor key, I automatically wanted to find the relative major. With all major scales, there is a relative minor scale that shares the same notes, but begins on the sixth note of said major scale. The question to myself was: which of the major scales has an "F" as the sixth note? The answer: Ab - number of flats in this key = 4

Those are the seven notes of the Ab major scale. So, if we begin the scale with the sixth note, "F", playing the same notes, we end up with the relative scale of Fm:


I've included the roman numerals that indicate the Major, minor and diminished scale degrees. As we'll find out here, those rules were made to be broken. Now, I've only gotten the first handful of changes and I know there's a modulation in there, so here's to hoping my theorizing holds water. The theme begins with these haunting chords:

From the C7 chord, the progression returns to the Fm. It's deliciously spooky stuff and used to great measure (pun intended) throughout the film.

Let's just start with this and continue to work with this track for the sake of getting to know the inner workings of composition as well as become more familiar with scales, keys and notes.

1. First off - does this section change keys? It goes through one cycle of chords and then repeats that cycle a whole step higher.

2. Instead of straight chords, the movement requires inverted chords. What seems to be the primary purpose of these inversions?

My goal is to eventually transcribe both the chords and melody for this piece. Instead of rushing headlong into it, however, I'll post progressively and we can look at not only music theory in action, but also how it can apply to chromatic dulcimer as well as other instruments.
Posted by Bing Futch at 10:18 AM