Way Up Upon The Suwannee River 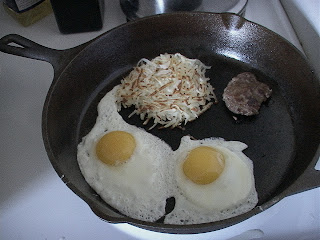 Monday morning after a busy and beautiful weekend; I'm lovin' this cast-iron skillet. Took awhile to get it seasoned (a year without a stove, but that's another story) and now that it's been lovingly oiled, it's used just about every day. Bliss is low-fat cooking in an old-fashioned skillet.

Bliss is also making music and meeting new friends, which was at the core of this weekend's 2008 Suwannee Dulcimer Retreat in White Springs, Florida. Just a wonderful time up at Stephen Foster Folk Culture Center State Park, where the weather was just about perfect and so was the company. I'm currently assembling podcasts out of the video that was shot over the two days, the first of which is heading into the editing bay as I type. Of course, I'll post links to them here with some notes on the peripheral activity.
Posted by Bing Futch at 1:39 PM

Email ThisBlogThis!Share to TwitterShare to FacebookShare to Pinterest
Labels: gigs