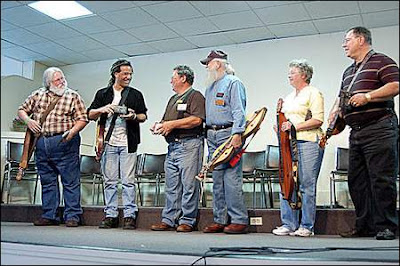 I arrived in Ohio Wednesday night and it's been an adventure every step of the way. From Bidwell, where I was the houseguest of Kendra Ward and Bob Bence to Coshocton, where all manner of interesting things began happening, including my first mountain dulcimer competition at The 33rd Annual Roscoe Village Dulcimer Days.

Mike Oliver of Ohio and Bing Futch of Florida picked up first place in the Mountain Duet competition while Doug and Gary Felt of Ohio picked up second. Judy and Bob Durham of West Chester won third place. - Coshocton Tribune

By the way, the paper made a mistake - that's Doug Felt and Gary Sager who were the second-place winners.

I also placed first in the mountain dulcimer vocal competition and second in the open competition, which was a mind-blower, considering who else participated. I'm still scratching my head over that one.

I've stayed with Jerry Rockwell and helped him get his new podcast up and running. I've met Marty and Don, owners of Wildwood Music (and couldn't resist picking up my fifteenth mountain dulcimer while I was there - named her "Marty"), I've played "Lee's Waltz", "Mississippi Sawyer" and "Wellyn" with Doug Felt and talked about Ireland with Lee Felt of Thistledew Acres. I've discussed the issues of TablEdit and the merits of margaritas with Sue Carpenter and the list of wonderful people I've met and visited with goes on and on - literally, a who's who of folk musicians. It's almost overwhelming - but everyone is so down-to-earth and nice!

I've also conducted a couple of radio interviews/in-studio performances that I'll have posted when I get the CDs. One was with 91.3 The Summit for the program "Just Plain Folk" which can be heard over the airways and streaming live on Tuesday May 22nd from 8-10 pm ET. I was a special guest of the program along with Bill Schilling, founder and organizer of Dulci-More 13, where I'll be performing and teaching this coming weekend.

The other was a live spot for WFCO 90.9 FM in Lancaster this morning at 8:30 a.m., which will be repeated at 5:30 p.m. this evening. This spot was to promote the workshop and concert that I'm doing tonight here in town.

I'll have a little time off this week to chill and relax with my good friends Denny and Rose in Medina before capping off the trip with Dulci-More 13. As amazing as this trip to Ohio is - I still get the delightful pleasure of returning home to my lovely wife Jae, and then driving down to Key West for our 3rd wedding anniversary. Talk about how sweet it is.

At some point, I'll get all of this great video up on The Dulcimerica Video Podcast, but I've been simply too on-the-go to settle down with the laptop, so be watching for new episodes later this week. Thanks to all the amazing people I've met, and to my hosts and hostesses for being so wonderful - this has been some kind of ride!
Posted by Bing Futch at 11:25 AM