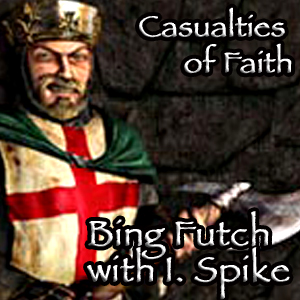 "Casualties of Faith" has finally reached the finished demo stage, thanks to a bass guitarist from Portland, Oregon named Steve Hale (aka I. Spike).


Besides the addition of his wonderfully in-the-pocket bass performance, I retracked the vocals and added some organ. Other than that, it's the same drums and same dulcimer tracks/solo that existed on the previous version. Steve's bass playing really energized this piece, you know, made it new again, since I've been working with it since September of last year. It just goes to show how important "feel" is to all the elements of a song.
Posted by Bing Futch at 11:40 AM