Back In The Producer's Chair 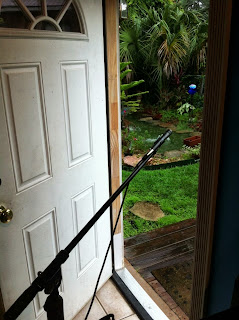 Usually how it works is you debut some tunes on the road and then record the most well-received ones for your next record.  I can't tell you how many times I played "Sweet River" and had folks ask "which album is that on?"

So, taking a major musical hint, I began laying down tracks for "Sweet River" yesterday using some new equipment that is making this particular recording experience totally dreamy.

I bought an Audio-Technica atm33a shotgun mic some time ago and it has been awesome to use in studio, but I've never possessed a stereo pair until now.  The second one is a little beat-up, cosmetically, but works fine and I got it for half of the price!  Using an XY Stereo miking technique, I got a beautiful dual track of mountain dulcimer rhythms and a likewise beautiful pair of overdubs in one take each.  Both mics were sent through my Presonus Firestudio Mobile without compression.  As usual, I'm using Garageband for laying down my tracks.

I then recorded the Native American flute track using my Studio Projects B1 condenser microphone and this is the first time that I've used this mic for this instrument.  The results are amazing!

Sometime during the flute session, a storm kicked up outside, so I set one of the atm33a's at the open door of the studio and captured a mixture of rain, pond noise and thunder to mix in with the track.  At one point (and completely on the beat) a huge clap of thunder punctuated and permeated the flute track.  I'm so leaving it that way.

Finally, everything is being heard through my new pair of Yamaha HS5 Studio Monitors.  For years, I've been using a TEAC consumer home system but felt like I needed to step up my engineering game in proper fashion.  These new monitors give a fine, clean signal that is enabling me to record and mix with the truest signal possible.

Today, I'll begin laying down bass, building the rhythm track and nudging all of the elements into place.  I'm not sure what release this will go on, but it will probably go out as a single since so many folks have shown a desire to have this track in their music collections.  Having performed it hundreds of times over the past year or so, it was probably the simplest recording I've ever done - everything in one take and distilled to the essence.

If you're interested in getting into doing your own home studio recordings, I'll be teaching a workshop on the subject at the 2nd Annual Florida Gulf Coast Dulcimer Retreat.  All you have to do is bring your laptop, audio interface, connecting cables and headphones.  I've been a home recording studio engineer since 1986 and have self-produced all of my albums, which are available all over the world through various digital distribution outlets and retailers.  I'm still learning, of course, because technology continues to evolve and change - but I'm happy to share with you what I know because a penny saved is a penny used to buy more cool gear.

I cannot begin to tell you how excited I am to hear that Sweet River will be on your next album. And to know that nature provided the perfect thunderclap has me near giddy!
Looking forward to hearing it.