Where Did The Month Go? 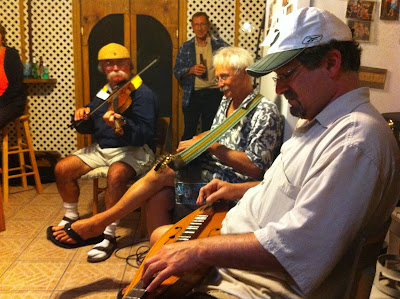 Had a brilliant time down in Key West; relaxing as it should be with some great friends making great music. Of course, Robert Force was there, bringing with him that walkabout spirit of discovery and wizened wonder. With him was Scott Snyder, a fan-turned-friend of Force's with a dynamic style all his own on mountain dulcimer and a number of other instruments as well. An encyclopedia of tunes and their origins, Scott and Robert were the entertainment for those who weren't actually playing in the jam and had no interest in listening to hyperactive fiddle tunes. Gary Zimmerman, who gigs seven nights a week there in Key West, had his fiddle on-hand and jammed with both groups; first the traditional jam on the deck and then sitting in with the pop music set, which also included lots of original tunes and folk songs.
There was a nice gathering of folks who came to take private lessons and jam, enough to fill the backyard at Casa Cabanas with the presence of those sharing music and really good Cuban food. Much like the Kindred Gathering, the legendary traveling celebration of anarchy and music in the Pacific Northwest, it's been said that this approach to an annual Key West Dulcimer Gathering is probably the best. Based on the good time had by all this year, I think they're right!
Again With The Extremes 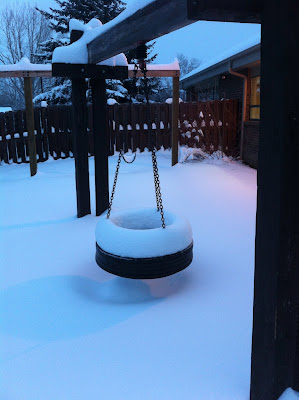 So sooner had I gotten back from tropical climes and island breezes, it was time to hop a plane and head to Ft. Collins for the Colorado Dulcimer Festival. Steve Eulberg and Bonnie Carol put this event together with the help of volunteers and it was an awful lot of fun, especially with the absolutely radical amount of snow that dumped over the weekend. The workshops, concerts and food were awesome, but there was just an extra little layer (or five) of magic that came with the snows. That and I met some of the most interesting people on this trip, from the airport to the classrooms - it was a wonderful experience!
Thanks to everyone who made this weekend a blast!
Booking March
I'll be performing at the Palestine Old Time Music and Dulcimer Festival in Palestine, Texas on the weekend of March 29th. Looking for pubs, clubs, festivals, library and school shows, house concerts and workshops starting March 16th and working our way from Florida. If you are interested in filling or suggesting scheduled dates along the route, please drop me a line!~
Next Shows: Orlando Folk Festival and McWell's
The Orlando Folk Festival is February 10 - 12 at the Mennello Museum of American Art (900 E. Princeton Street, Orlando) and I'll be performing on Sunday morning. That's the only February show in central Florida, so I hope to see you out if you can make it. The only central Florida show in March will be at McWell's (4757 S. Orange Ave., Orlando) on March 1st and then I'm gone for Texas by way of who knows what?
If you see some empty dates around my calendar and would like to arrange a workshop or concert, school program or presentation, please drop me a line!
Thanks for your continued support; sho na bish and blessings to you!
Posted by Bing Futch at 3:22 PM