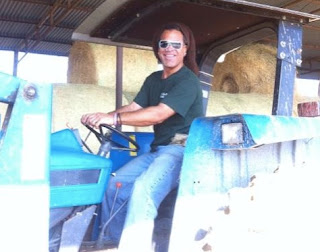 I'm parked on the Perrin Limousin Cattle Ranch in Decatur, Texas where Rusty and Marcy Perrin raise Limousin cattle for breeding.  As one of two couples who went for the "Total Package" as offered during the fund-raising for the RV Project Tour, the Perrin's pre-bought a bunch of stuff that included albums and books, registration for the Key West Dulcimer Fest and my presence at their home for a week to do various chores and perform a private concert.

What this means for me is that I get to do a whole lot of real cool things that I've never had the chance to do before.  Herding cattle and experiencing farm life; it's like the county fair but a whole lot better!

This leg of the tour has been wonderful - and so very different from the first two legs through the southeast and northeast.  Going back home to California was a huge element in just how different this leg was; meeting up with old junior high school and high school friends was a blast.

Traveling through the great southwest was a welcoming sensation as it's been so long since I had been back in my native region.  Then, getting to explore Oklahoma more than before with a nice voyage through Texas taking place right now - the climates are all different than this summer and the experiences are composed of much different dynamics - all of it good; from the festivals of the south and southeast in early June to the various small towns and big events of colonial North America - I have seen more than my fair share of the country in the past few months and it's been awesome!

Woven throughout all of this is the music.  Music made and discovered, music shared and explored - I've been recording snippets of time since June and I'm looking forward to revisiting the moments when the fourth and final leg is completed in November.  For now, there are still many thousands of miles to go and many thousands of smiles to be smiled.