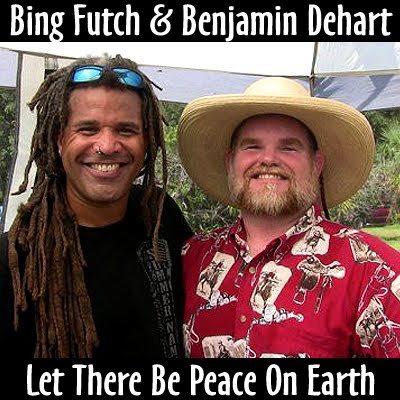 Just exactly who reads this stuff, anyway? If you're reading this, please leave a comment. Want to see if this thing is working. You've got plenty of interesting stops on the Information Superhighway to make, so I'm chuffed to bits that you've chosen to stop and have a scone or two here in my own little ghetto of the grid.

"Let There Be Peace On Earth" was released this month after missing the opportunity to release it during last year's holiday season. It features the incredible pipes of Benjamin Dehart: The Cracker Tenor and you can check it out here, if you haven't already.

Also, if you missed the album that flew under the radar, check it out here.
A project for the good people at Folkcraft Instruments.

Christmas is over. New Year's Eve is never a big deal around this household. A couple of movies. A bottle (or three) of bubbly. Kiss. Snuggle. Chill.

What this means is: time to dig in.

There's lots of exciting new stuff that's been developing over the past month or so and it's all been kept very under the hat. I'm looking forward to the Key West Dulcimer Fest in January, of course hoping that our good weather isn't on back-order come that third week.

Looking back on the past year, I see a lot of those days spent planning were put to good use. That just reinforces the time that I spend studying. Researching, working through test books and memorizing elements of music theory. Practicing scales, bouncing improvisations off of the wall. Sitting at the computer for infinite stretches of time putting it out into the universe; data salvo!

Times are tough all over and they're going to get tougher before they get better. That, coupled together with the ongoing studio improvements here at Casa de Milagro has seen a sort of bittersweet decision to sell a lot of my dulcimer collection to raise funds for equipment upgrades. To be fair, these were instruments that were not being played on a regular basis and would probably only be engaged on special occasions in the foreseeable future, though they'd all seen their share of stage-time. They each went to good homes where they'll be loved and played as a primary instrument, meanwhile leaving me with enough cash to do some shopping.

What I got (and what's on the table) will be the focus of the next couple of blog posts as we begin a brand new year of renewed production.

For everybody who reads this blog, watches "Dulcimerica", listens to my music or attends my workshops; if you've paid any attention to me this year: thank you. Somewhere between time wasted and a worthwhile time spent is a place where everyone is grooving to the same beat. Happy New Year and many blessings to you for a great 2011! The beat goes on.


If this year was any kind of forecast, then 2011 is going to be a great one for everybody (keep putting that good mojo out into the universe.)
Posted by Bing Futch at 10:17 AM