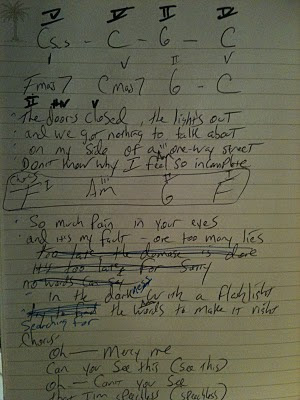 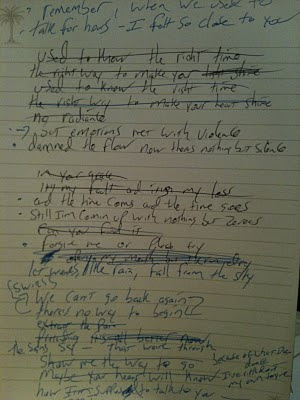 As production has once again resumed on "Dive!", I'll be posting some of the process here so you can get an idea of how this stuff comes together.

Above is a perfect example of how it starts - or not. Basically, this latest tune evolved out of playing a riff on the chromatic mountain dulcimer and then seeing what would happen with it after awhile - what kind of inspiration would come out of the notes. After laying down a basic drum pattern and some bass - it became clear that this would be a rocker of some sort. Seeking a comfortable spot for my voice to begin creating melody, I laid out some basic changes using piano, which would then get transferred to the chromatic dulcimer. I'm more familiar with piano voicings and part of my learning curve with the chromatic dulcimer is to take those voicings and then make them work with three strings. Or not.

The tune, called "Speechless", takes some unusual twists and turns, but I wanted to use chord leading to make it feel more natural. Chord leading refers to the fact that some chords naturally lead to other chords.

For example, I'm beginning the tune in an odd way:

Instead of starting on the I - which would be Bb - I've begun with a chord based on the V - which happens to be the 5th of the root chord. (Bb - D - F are the ingredients of a Bb major chord.)

Getting into the tune gets a bit more conventional. These scale degrees are based on the Bb major scale, which is: Bb - C - D - Eb - F - G - A. Remember that the chords and scales built off of the 1st, 4th and 5th notes tend to be major while the 2nd, 3rd and 6th tend to be minor with the 7th being diminished.

The above is pretty much the verse progression. I've kept the scale degrees simple, even though I've chosen to use extensions on the I and V chords. Why not the II chord? Sounded too complicated. The progression moves three times this way, and the final way replaces the last V chord with a minor third or Dm. To my ears, with so much in a major key - the minor chord signals that something big and dramatic is coming in the chorus.

There you have the chords of the chorus. It repeats twice before heading back into the verse. Pretty simple, eh? Except for the second time through when and additional Bbm6 chord serves as a very dramatic transition to the bridge.

Let me tell you, I had a devil of a time trying to figure out where the bridge was going to go after that crazy bit of color - and, after trying a number of things - this is what I ended up with:

Here, I've completely leapt outside of the box and gone with changes that are very classical in a nature. Take notice of the Major VI - a recurring Major II and a Major VII. I've also included a minor VI as well - to really create a bit of urgency and darkness.

After this - the tune goes to the chorus progressions for a solo run and then one more pass through the chorus before ending. At just over three minutes long, it's probably one of my shortest tunes, yet it packs a powerful punch. Once I get a bit more polish on the tracks, I'll post it as an exclusive streaming track for members of my mailing list (so you still have time to sign up if you haven't done so already! You can use the form at the top left of this page.) In the meantime, here are the lyrics:

The door's closed, the light's out
and we got nothing to talk about
on my side of a one way street
don't know why I feel so incomplete

so much pain in your eyes
and it's my fault, one too many lies
in the darkness with a flashlight
searching for the words to make it right

remember when we used to
talk for hours, I felt so close to you
but emotions met with violence,
damned the flow, now there's nothing but silence

and the time comes, and the time goes
still I'm comin' up with nothing but zeroes
forgive me or please try
let words, like rain, fall from the sky

there's no way to begin
we can't go back again
the signs say that we're through
because of what I've done
I've ripped out my own tongue
how am I supposed to talk to you?


That's it for this week - I've got quite a few new tracks for "Dulcimerica: Volume 2" recorded this week and will be working quickly to have that one mastered before the end of December. "Dive!", however, will continue to flow as I write new tunes and work with the ones already in production. I hope this process serves to shine a light on how songs go from idea to recording and if you have any questions, please don't hesitate to post them to the threads here.

Email ThisBlogThis!Share to TwitterShare to FacebookShare to Pinterest
Labels: recordings