Okay, so this started off as a "testing one-two-three" and turned out to be a not-bad knock-out of "Wellyn" by Robert Force.

What makes this track remarkable is that both dulcimer parts were recorded, E.Q.ed and mixed on my iPhone. 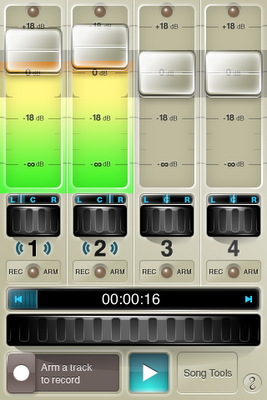 As many of you know, I've been an iPhone owner for about three weeks or so after a long courtship with the Blackberry Curve 8310. Jae and I both upgraded at the same time (we're with AT&T) but figured we couldn't both afford to get the pricey Apple gadget, so I took the bullet and initially figured that the split would be fine. It didn't take long to begin silently envying and likewise coveting her iPhone.

Now that I've got one, it's quite clear why. It rocks. In ways the Blackberry could only dream about. 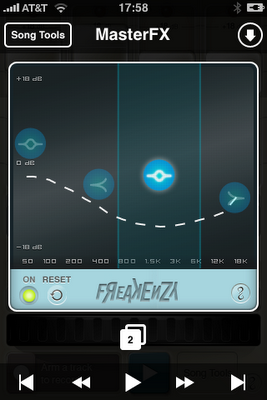 This is pretty sick stuff. You've got a basic four-track recorder which uses the iPhone's built-in microphone. You'll need a set of headphones, with or without the microphone. You lay down track one, then track two while track one plays back. You add some percussion and bounce it over to track four and then begin filling up tracks one through three with other instruments and even some vocals. Just like the real thing only you're doing it on your iPhone. 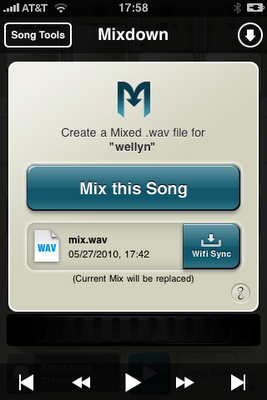 Once you've recorded your tracks, you can do a number of things, from post-recording equalization to mixing down or copying to a clipboard for use in other applications. Then, when you're ready to do something more with it - you can sync via Wi-Fi to any nearby computer with a browser, download the mix or all of your single tracks in .wav format to use in your digital audio workstation (DAW.)

People are creating entire albums with this app - and, as you can hear - the sound quality has an unmistakable "you are there" sense about it. Just incredible. It's not a .99 cent app by any means, but considering what you're getting in this sleek-yet-powerful package, eight additional bucks is a small price to pay.

Jot down musical ideas, create arrangements, lay the groundwork for your first or next album. Sure, there are a few things wanting (like lack of a metronome or quantize feature), but apparently those are fixes that have probably already been worked into the next version. I've got some pretty cool apps in the past three weeks, but I'm gonna have to say that this one is just the coolest of them all.
Posted by Bing Futch at 5:15 PM