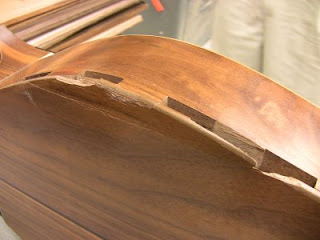 After a wonderful weekend at the Gebhard Woods Dulcimer Festival, I hopped a plane for Detroit and caught a connecting flight to Ft. Wayne, Indiana where I'd be meeting up with Richard Ash, president of Folkcraft Instruments.

Richard arranged a concert at the Folkcraft H.Q. In Woodburn and it would be my first visit to the home office since buying my first Folkcraft dulcimer in 1994.

The puddle-jumper that I boarded in Detroit couldn't accommodate Annie, the Folkcraft double-neck dulcimer that was custom-built for me after signing the endorsement deal with the company. So, as I've done a couple of times before, she got gate-checked and I asked the baggage handler to be careful, since it was an acoustic instrument.

I believe he honored that. And I believe that something bad happened once the plane arrived at the gate in Ft. Wayne.

The two baggage handlers there both looked at me strangely as I picked up the soft purple instrument case. Something told me to look inside; but I didn't.

It wasn't until two hours later, after visiting with Richard and getting a brief tour of the facility, that I got checked in to my room and took her out for a look-see.

Right away, I knew the damage could've been much worse. That didn't stop the anger from welling up inside of me as the splintered and cracked wood registered within my brain. One side of the Galax back had been crushed, as if by a heavy impact. A crack ran along the side.

With a heavy heart, I posted some pictures to Twitter and slept on it. At least it had happened not far from her birthplace. 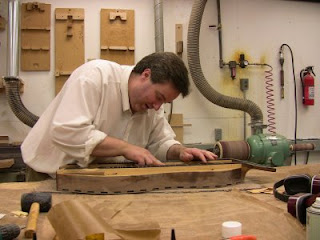 The concert is in a few hours and Steve Ash, her creator, has already replaced the back and worked some miracles of support. By the time I board the plane tomorrow, she will be like new. But, I'll tell you something; this has taught me a valuable lesson. So, the next time I need to gate-check my instrument, I will take a picture of the baggage handler and get their name. I'll also take a picture of Annie. Then, upon arrival, I will inspect her for damage and, upon finding any, will take another picture of her along with the baggage handler who unloaded her.

Kudos to Folkcraft for taking such great care of their artists!

Sent with Aloha! via Blackberry

UPDATE: I'm home now and Annie is still at Folkcraft undergoing some cosmetic refurbishment. She'll not be coming with me to Kentucky Music Week, but I'll have her back in time for my show at the Pickin' Porch in Townsend, Tennessee on July 4th. She'll be looking good as new (and she already sounds just as good as ever.) Thanks to Richard and Steve for all of the hard work they've put into her repair - I know those guys have tons of instruments to finish for Summer NAMM show in Nashville this coming July.

UPDATE PART DEUX: Annie is home, looking as new as the day I got her (which was only seven months ago.) Since this incident, a singer/songwriter by the name of Dave Carroll has taken the media by storm with his song and video "United Breaks Guitars." With so many people asking me to write a song about my horrendous experience with Northwest, I found a way to pay homage (and say thanks) to not only Dave, but the great Tom Paxton, whose "Thank You Republic Airlines" was the original "you crushed my instrument" tune. My track is called "Only A Northwest Song" and is viewable here.