Welcome to the dead of winter 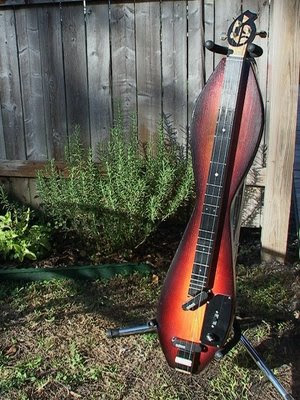 This holiday season was fun; more than ever Jae and I were looking forward to all the events, shows, get-togethers, parties, Disney parks and having family over for Christmas. And it all started early this year when I began recording "Christmas Each Day" in August - so we've had our share of Christmas music around the casa. Happy to say that we're just going to chill at the homestead on New Year's Eve, which means that this is effectively the Dead Of Winter.

I love being busy, but I also love the quiet, non-busy times when there's not a whole lot of commotioning going on. Time to just sit down with the dulcimer and let go. Work on learning tunes or writing tunes, exercising towards the ever-present goal of improvement. Thinking about future projects and shoring up the foundations for them; woodshedding, basically. We don't have one of those. But if we did, I'd be out in it, head bent over a dulcimer and cutting loose.

The new Greibhaus arrived on Christmas Eve (so I named her "Eve", natch) and I'm sending "Paloma Blanca" back to Jerry for refinishing before he puts her on the market. After a few gigs, I realized that some of the tone/sound controls were getting in the way of my strumming. After talking with Jerry, he created a new configuration for those controls, which I tried out up at the NGFDA Fall Festival. The lovely sunburst design was another step in the right direction and I had him install the 1+ and 8+ frets so I could continue to explore that world. "Eve" is just as sweet-sounding as "Paloma Blanca", but with an added bit of punch in tone and a more solid fretboard which cancels out finger-knocking. The recessed tone switch makes it easier to strum without obstruction and also allows me to anchor while finger-picking or palm-muting. I still have to get strap buttons installed (our drill died) and then give her the stand-up performance test. 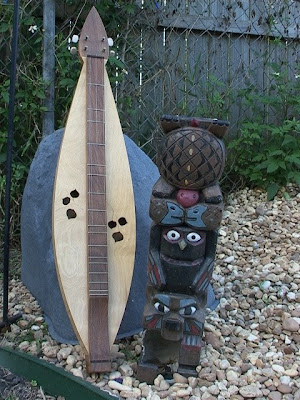 "Dawn" was one of Jae's Christmas gifts to me this year (hence the name, dawn of a new day) and is pretty special; she did a little research on this one. It's a 1970's era Cripple Creek Dulcimer, teardrop design much like the first Cripple Creek that I ever bought. It was during the summer of 1986 that I worked for Bud and Donna Ford there in the Knott's Berry Farm shop and I sold many instruments just like this one. It sounds great and Jae figured I'd hang it on a wall somewhere, but I've been playing it quite a bit. It's neat having a purely traditional dulcimer (no 6+ fret) that sounds decent - I use the dulcimers that Jae gets online for student loaners, but I'm not sure this one is going home with anybody!

Now that "Christmas Each Day" is finished, having sold quite a few copies at shows this past month and it's now available through iTunes and CD Baby. It's doubtful that I'll record a Christmas album annually, most artists tend to wait a few years before they offer another edition of Christmas tunes. Part of the reason for that is that you've got such a narrow window for sales - perhaps people will purchase some during the year in preparation for the holidays, but not many folks apply that much forethought to their music selection. Next on the to-record list is "Dulcimerica: Volume 2", the follow-up to my mountain dulcimer instrumental debut. Concurrently, there will be some original spaced-out composition going on, I'm sure - which will lead to something wacky in the spring. I've been itching to do something really progressive.

Work on "The Glasgow Reel" continues - I've got it memorized and am working with speeding it up before I begin improvisation. Last night, I tabbed out an arrangement of "Beauty and the Beast" that I'd like to have prepared for festival season when it comes around (won't be long now!)

Next month, Jae and I head to Anaheim, California (home of Disneyland!) for the NAMM Show, which is a bi-annual trade show of sorts for music merchants and manufacturers. I'll be at the Folkcraft Instruments booth demonstrating mountain dulcimer and kicking off the new year with a focus on this new endorsement. Hope everybody had a great month and that you'll have a wonderful New Year's celebration filled with promise, hope and, most of all, love!
Posted by Bing Futch at 2:10 PM