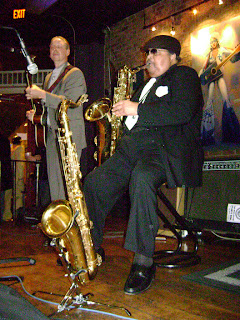 Jae and I just got back from Memphis, Tennessee. We were there for The International Blues Challenge and the Orange Blossom Blues Society, of which Jae is vice president, had sponsored the Smokin' Torpedoes, so we there to lend our support as well as drink up the galactic amount of blues bands all crammed into a small number of venues up and down Beale St.

It was our first trip to Memphis, and there was plenty to see and do, not only at night, but during the daytime as well. First on our list was The National Civil Rights Museum, housed inside what used to be the Lorraine Motel, where Dr. Martin Luther King Jr. was assassinated on April 4th, 1968. Walking past the motel facade was slightly eerie as we approached the museum, two late 60's model cars parked just below the balcony where he was shot. Inside, the museum journey begins with a short film about the American civil rights movement and then proceeds to unfurl gracefully like a bud metamorphoses into a flower. From simple glass display cases and wall-mounted documents to fully immersive sets, video loops and figurines, the effect is like a slow-motion explosion. By the time we arrived at the room where MLK spent his last night alive and then suddenly found ourselves standing practically on the balcony, looking down at the spot where he was killed, the tears had begun to flow from both of our eyes. 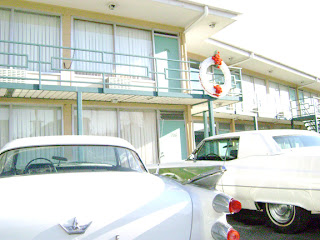 The powerful "you are there" presentation takes on another highly visual perspective when you cross the street over into a second-wing, separate from the Lorraine motel. Here, amid recordings of news reports and reactions to King's death, the focus switches to the investigation into his murder and similarly leads you to the boarding house bathroom from where James Earl Ray fired the fatal bullet. Evidence and police procedurals make up the larger part of this journey before heading downstairs for the denouement, a collective look at the ongoing nature of the civil rights movement, not only in America, but all around the world. By the time you've exited into daylight once more, you've taken a remarkably personal journey into the very real history of, and ongoing battle against, racism.

Needless to say, a trip to Sun Studio the next day wasn't nearly as emotionally draining. In fact, it was sort of a rush to be in the exact studio space where Lightning Hopkins, Howlin' Wolf, Ike Turner, B.B. King, Little Milton, Elvis Presley, Jerry Lee Lewis, Carl Perkins, Johnny Cash, Roy Orbison and others helped to form the sound that we know as rock 'n' roll. Truth be told, I was a little more stoked to be standing in the same space where U2 recorded part of their record, "Rattle and Hum." 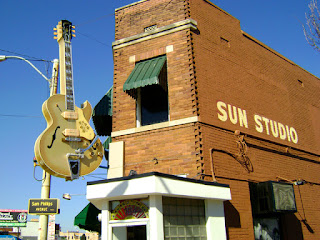 As you might imagine, by the third day, I was swimming in musical ideas, inspired by the places we'd been and the people that were rockin' stages on Beale St. Since I always travel with a mountain dulcimer (makes air travel so much more bearable), I had planned to bring along a battery-powered amplifier and do a little busking on Beale at some point. This was early Saturday afternoon and, before I was chased away by someone official-looking ("you need a permit," I was told), I had made about $50 during the one hour that I sat in front of Silky O'Sullivan's. Many of the IBC participants stopped to listen and drop a buck or two, which is always nice, to be appreciated by fellow musicians.

The Torps didn't make the finals, but they had a great couple of shows and held their own against a stellar assortment of bands from all around the world. One in particular that we both enjoyed enough to purchase a CD were The Nouveaux Honkies, who were a highly entertaining four-piece band out of Stuart, Florida, which meant that we could go see them in our home state, good thing for that. 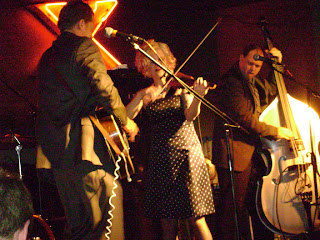 Through all of this, Jae and I acted alternately like a couple of kids, newlyweds, horny young lovers and The Bickersons, fueled by the excitement and history of the places we went, stoked by the music that we heard and spirited by the copious amounts of booze that we drank, though we imbibed far less than our usual, probably because we're consciously trying not to dance so close to the fire. The trip was still, in my opinion, a victory for us, because what we loved, we embraced, and what we didn't, we discussed. It all came down to hand-holding and smiles across the airplane aisle on our way back home to Orlando, so we're getting better at the balance of love, which ain't always peaches and cream, as anyone in love can surely tell you.

The highlight of the Memphis trip happened in front of the Orpheum Theater where the IBC finals were taking place. I'd been carrying "Helen", my new Mike Clemmer dulcimer, around all day, never knowing when the inspiration would hit. Well, in this down-time before the solo and duo competition, I decided to sit down on my little tripod chair in an alcove just to the left of the Orpheum's entrance. I'm always wanting to play - and always looking for ways to get my name and music out there - what better chance than to play a little as a huge chunk of the international blues community strolled by?

Well, some folks came along and stopped, smiled, threw in a buck or two, took pictures and whatnot. Then along comes a man who I'd seen earlier in the theater - someone had thanked him for the fabulous show he put on, so I knew that he was probably a heavyweight blues cat. I just didn't know who he was. I was jamming a little riff in the key of Dm and he stepped over to my side, said "I know that tune" and began singing. Dirty, gritty, smoky vocals, he was oozing "real deal", and then he brings out a mouth harp and starts wailing on this thing. I was looking at him and smiling, wanting to stop and just listen, but realizing that this was a duet, kept on jamming the changes.

I tell you, suddenly there were a lot of people standing around, taking pictures, flashbulbs going off, and though I was vaguely aware of the crowd that was forming, the whole universe was me and this man, having a musical dialogue and riffing this tune. Through some signal in spirit, we both ended the tune and shook hands while the collected onlookers clapped and kept stuffing money into my hands and case. I thanked the mystery bluesman and he was smooth and gracious. I really needed to find out who he was.

That's when a guy standing on the sidewalk shook his head and smiled in disbelief. "Watermelon Slim", he said. Aha! I thought. There's the name I'm looking for. But I'd never even heard of the man. That was one for the Google search later on. We ran into each other a couple of times and his agent gave me a card, saying he'd hook me up with some pictures of the two of us jamming. I told Slim, "I think I might've hung on the '1' too long," and he replied, "that's alright, I was playin' it loose."

When I got back to the room and looked him up, my jaw hit the floor. Watermelon Slim's life as not only a blues artist, but as a veteran, blue-collar worker and academic, blew me away. There's no hesitation when I proclaim that it was a brush with greatness - and a true musical blessing. 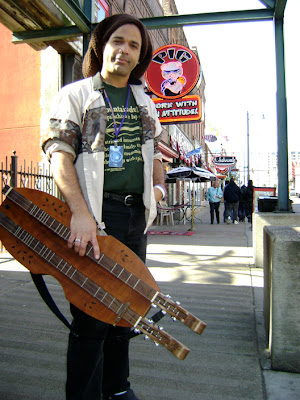 The story of the blues and its transformation over the years dovetails with the history of race relations in this country. Like so many different types of music, it has been a uniter and a divider, sometimes all at once. When painted purely with the colors of race, the music stands like fences that criss-cross the world. But when filtered through the color-free prism of the soul, it becomes an equalizer of powerful effect, a force that unites the troubled hearts of men and women as we struggle through the day to day of life. I've written a few blues tunes in my life, and they were borne of hardship, to be sure, but I've internalized most of my deepest troubles. And I never felt truly "authentic" as a singer and performer of blues because my life has never been anywhere near as troubling as some blues performers'. In hindsight, I know that not to be so true any longer - the troubles may be different, but the results are the same. Who was it that said, "the blues is when bad things happen to good people"? I'm not sure it can even be attributed to one person, though someone might lay claim to it anyway.

My feet stand firmly on folk and roots music, which certainly encapsulates the blues. Relatively speaking, I've had an amazing life and tend to focus on the positive through my music, not that the blues can't be upbeat celebrations of all that's right in the world as opposed to what's wrong. But as an outlet for the trials and tribulations that would kill me if I turned to anger or, worse, internalization, more and more the blues and its many cousins have spoken to me as a way of building bridges between hope and despair, white and black, American and foreigner, spiritual and secular. The more we see that we have in common, the more we'll pull together and be able to finally return home where we belong. Not necessarily a city or country or even a state of mind - but a place of Origin, a place of Light and a place of Love.

Memphis rocks, for showing that to me and re-affirming that in so many ways.
Posted by Bing Futch at 7:42 PM