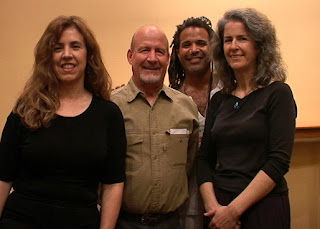 New England skies were clear and blue as I made my way up Interstate 95 towards Connecticut. The drive had been smooth and uneventful, save some traffic on the New Jersey Turnpike. Nothing had quite prepared me for the sight of Manhattan island looming in the distance. I'm not terribly romantic for New York City, but it was an impressive landscape to consider, an image that no movie or television screen can ever hold. I like how crossing the George Washington Bridge just thrusts you into the guts of the Bronx. It's like shaking hands with someone and then shoving your head into their pants to see their dirty drawers. Welcome To New York. Nothing against the Bronx. Culture-shock, that's what it is. That and I-95 traffic into New Haven. The mantra for this trip was "doesn't matter where you are in the world, bumper-to-bumper traffic is pretty much the same."

Nutmeg Festival was a blast; it was too short. My hosts were David and Nancy Cross, who run a little business called Backyard Music. Flatmates were David Neiman and Gary Gallier, the former being a past Winfield champion, the latter also being a former Winfield champ and the maker of my next mountain dulcimer (I'm on the waiting list.) I arrived just in time to set up camera and get ready for the first evening's events, which featured sets by the workshops leaders and included this magical moment in time:


I've never had an audience respond that way before; it was an incredible shared experience - watching the video again gives me chills, in a good way.

Also, for the first time, my workshops spilled over into larger rooms and in one case, we ended up outside in the beautiful sunshine (temps were in the upper 70's, a rare thing in late September.) What great groups! We had such fun in the Primal Dulcimer class, I thought we were going to blow the doors off the place. Word has gotten around about that workshop. I believe someone said it best, "what happens in Primal Dulcimer stays in Primal Dulcimer."

It was a delight to meet Brenda Hunter and Mary Tulin - wow! They're both super-nice people (from Bakersfield!) and what incredible music they played. Gary was amazing as well - the Saturday night show was electrifying.

Like I said, it was too short. But a lot of love, music and pure living went on in those two full days.

Mohave Gets In Gear

The band is in the recording studio next week to cut four tracks and then our first show of the season will be November 3rd on Stage 3 at 9 pm. The event: The Deland Original Music Festival. Joining me will be Roger Zimish (guitar) and Rich Mueller (stand-up bass) from The Bad Boys of Faith along with Mohave tribal drummer Gil Oliver and special guests. It's the biggest one-day music festival in the southeast, $10 gets you in. Don't miss the fun - check out the schedule, make it a date.

I get e-mails! Thanks for letting me know what it is that you'd like to see and hear. There is a Mountain Dulcimer Beginner's book in the works along with the "Dulcimerica: Volume 2" CD. There have been some requests for a DVD instruction video, but I'm not sure about it. I'd rather put things out there on the podcast for free - but I encourage private lessons and self-instruction because you've a better chance at developing your own style. Eh - we'll see what happens.