After a hard-impact learning curve with the TablEdit software, I'm finally making some progress towards finishing the songbook. Once you get the hang of it, the going is easy. Getting the hang is not-so-easy.

In any case, much of the sheet music for tunes that I had created with Sibelius have been uniformly re-done and now the process of notating new and older pieces of music has begun. I'm not sure what to call this songbook, but I'm thinking of the title "Dulcimerica: All Over The Map", because it truly is. Style-wise, that is. Any songbook that contains the traditional tune "John Henry" as well as the theme to Steven Spielberg's dinosaur flick "Jurassic Park" is really stepping outside of conventional music boundaries.

It will be mostly an original songbook, with my arrangements of some traditional and not-so-traditional favorites. One piece that I'm having fun with is the Disney medley, which will include parts of songs from "Old Yeller", "The New Adventures of Davy Crockett", "It's A Small World", "The Little Mermaid", "Cinderella" and "Sleeping Beauty." The licensing on this one will more than compensate for all of the original and public domain music that's on the CD, but it will be well worth it, absolutely the show-stopping final track.

At the same time that I'm tabbing out tunes, I've also been on the search for traditional Irish music, jigs, reels, airs and the like, just to get my fiddler's repertoire up. This week, I ran across a delightful traditional Irish tune called "Off To California" that I can't wait to play out live. 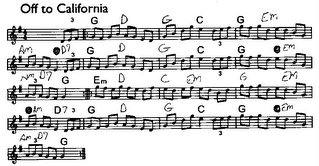 Mohave's got a recording session at Full Sail in two weeks, so I've also been charting out the changes for the players - "Music" is one of the tunes and the other one, I'm not sure yet. Perhaps "Neon Tiki" or something newer. I want something that's not too complex so that we can learn it, rehearse it, record it and have it under our collective belts. More word on that as the day approaches!
Posted by Bing Futch at 8:40 AM